Shelly Sorem came to know and love the Lord in 1999 and He has been the guiding force in her life ever since. From the time she accepted Jesus Christ into her life, everything seem to change. God changed what was important to her and how she lived her life. She has a Bachelor of Science degree in elementary education and spent three years teaching second grade. She also has a Masters degree in counseling psychology and was a counselor at M. D. Anderson Cancer Center in the pediatric and adolescent clinic for three years. It was during this time that the Lord called her into ministry.
Shelly began working at her church in children’s ministry where she was in charge of Sunday school for children from preschool through 5th grade. Her first assignment was to write a lesson on Noah and the rainbow. Shelly will never forget the panic she felt when she was asked to do this because she had heard of Noah and the flood but she had no idea about a rainbow. Shelly didn’t grow up knowing the Lord and had never read the Word of God until she became a believer in 1999. Shelly loves learning and dug into the Word of God and read and studied about the life of Noah in order to write the lesson plans. This is where the love of the Word of God came alive in her and she studied each week in order to be able to write the lesson plans and teach the students.
After three years in children’s ministry, Shelly was asked to be the youth pastor at her church. She was scared to death to work with teenagers, especially teenagers who knew more about the Word of God than she felt she did, but God called her to the job and equipped her to do it. Being a youth pastor was one of the biggest blessings in her life. She loved working with the teenagers and seeing their passion for the Lord. During her time as youth pastor, several students came to know the Lord and it was something that inspired Shelly to try to reach more people for Christ.
After two years as a youth pastor, her husband Bill was transferred to Doha, Qatar and the family moved there with him for four years. Shelly and Bill knew God wanted them to move to Doha, but they had no idea why or what was in store for them. It was in Doha, literally in the middle of the desert that the Lord again changed Shelly’s life. He drew her into an intimate relationship Him and taught her to trust Him with every aspect of her life. Without friends and family close by, Shelly quickly learned to lean on the Lord. He took her out of her comfort zone to help her realize her dependence upon Him.
In Doha, Shelly became actively involved in the Women’s Ministry and served as prayer team leader, planning and events coordinator, Bible study facilitator and Bible study leader. It was during this time the Lord shifted her focus from serving children and teens to women. Shelly feels as though the Lord had her studying and teaching people who were on the same level with her spiritually, beginning with small children, then teens and finally graduating to adults. Serving in the Women’s Ministry ignited her passion for women and helping them come to know and love the Lord the way she did. She has since been a speaker at women’s conferences and retreats and in Doha, The United Arab Emirates, India, Malaysia, Singapore, Nigeria and the United States.
Shelly and her family returned to the United States in 2010 where she has written and taught a women’s Bible study on trusting the Lord, Sunday school lessons, led a small group and continued to speak at women’s events. She has just published her first book Deeply Rooted which is a 365-day devotional geared at helping people jumpstart their quiet time, develop a passion for the Word of God and grow closer to the Lord.
She and her husband, Bill, live in Katy, Texas with their two teenage daughters, Allison and Emily. Allison is a sophomore and Emily is a freshman at Texas A&M University. Next to her family, Shelly counts her friends as her biggest blessing. Her sisters in Christ love and encourage her as well as challenge her and hold her accountable to being the person God created her to be.

Deeply Rooted Devotional written by Shelly. Click on the picture to order a copy. 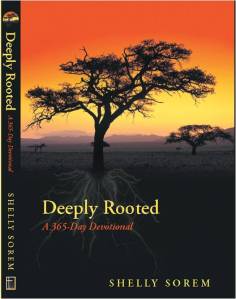